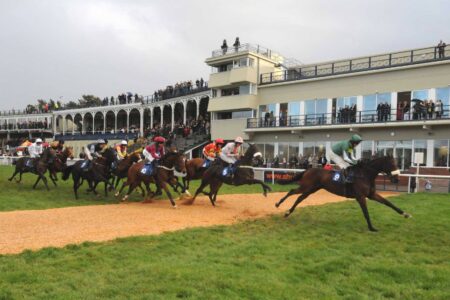 In 1947 Caughoo won the National by 20 lengths at 100/1. Johnny had told my family to back it, and my grandmother did. Until that time the only horses that interested me were the farm’s shires, but the present that my grandmother gave me to celebrate her win turned my interest to racehorses. This interest was heightened by my friendship at school with Brian, the son of Stan Wright who trained a few horses at Leintwardine, not far from Ludlow. His small string were very successful and for several seasons he had the highest strike rate of all British trainers. His great triumph came when Bandalore won the Champion Hurdle in 1958.

I was at Bedstone School just a few miles  from Ludlow. In 1949 Ludlow’s first fixture of the season coincided with the school’s half term. As I did not have a parental visit, I was allowed to visit the Wrights who took me to Ludlow’s opening day of the season. I was hooked.

All these years later the new season is once again underway and soon the sport’s big guns will be back on the course. Most racegoers will be dreaming of successful days ahead at Cheltenham and Newbury. For my part however, it will be visiting the country courses that has the most appeal. A day out with a few hundred local folk at Ludlow, Hexham, Fakenham or Wincanton gives me much greater pleasure than being amongst the massed ranks at Aintree.

Ludlow remains one of Britain’s most charming National Hunt courses. The warm bonhomie of the local country folk is matched by that of the racecourse itself, situated on the edge of one of our most celebrated and historic towns. Ludlow boasts a castle built in the time of William the Conqueror, over 500 listed buildings including the Feathers Hotel, built in the reign of James I, and the most elegant Georgian houses in the country, and all set in the finest countryside these  islands have to offer.

The town is a foodie center with several  Michelin starred restaurants attracting visitors from far and wide, but 30 years ago equally fine food could be found on the racecourse, courtesy of the caterers, a small family firm by the name of Hughes, who also serviced the course at Bangor on Dee. Owners and trainers always arrived early at Ludlow to avail themselves of  a leisurely lunch of outstanding quality. In this convivial atmosphere tongues, normally very restrained, were loosened, and little overheard snippets, such as “mine’s not off today” or “you can have a few quid on mine”, normally enabled the afternoon punting to be a profitable one. Today’s Jubilee and Plymouth Stand dining keeps that long tradition alive. 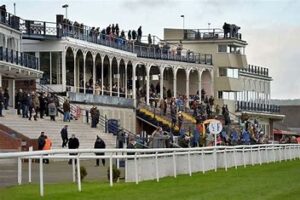 Wonderful old grandstands at Ludlow add to the atmosphere

The romance of the betting ring

These were the days when the late  Captain Forster and David Nicholson were in their pomp, Tom George and Nigel Twiston-Davies were beginning to climb the career ladder and Venetia Williams was still assistant to John Edwards. Eddie Freemantle was still a novice punter while John Gough was the understated bane of Len Boden and Graham Williams, two of the several bookmakers that would lay a horse to a hefty sum. In the pre mobile phone days Ladbrokes and William Hill each had three runners, they and the tic-tac men were part of a big family, as at home talking to the stewards as each other.

In the modern electronic age, Freemantle and Gough will be sitting in front of a bank of computer screens to prosecute their aim of lightning Boden and Williams’ satchells, rather than dodging between the bookmakers’ pitches.  This has removed much of the on course romance in the betting ring, but the overall charm and good natured fun remains. And throughout, the simple exercise of seeing whose horse is fastest, and the best over an obstacle still remains an imperative.

After a winter in which attendances have been sorely constrained, the simple joy of watching top flight steeplechasing and hurdling in Shropshire’s last remaining racecourse remains a taste to savour, and I for one can’t wait.

So as the new season commences, hotfoot it to Ludlow once more and enjoy what will be a glorious experience. More than 80 years of visiting Ludlow Racecourse testify to my fondness for the track that sparked my interest in racing.

See you there on October 6th!