Do reasons for cancellation get more bizarre than this? What it takes to stop a race meeting.

Between March and the end of June 2020, British racing endured its longest shutdown in living memory as the Covid crisis kept everyone confined to their homes. It was a bizarre time looking back, and knowing more now than we did then. But the authorities in the British Horseracing Authority and Racecourse Association took a leading role in bringing about a return to racing, a position many European turf authorities were able to emulate.

Racing is no stranger to cancellation. Weather is normally the reason: frost, waterlogging, floods are the usual scapegoats, but is this the case everywhere? And is it always the weather that is the culprit?

Here are some quirky examples from British racing annals, and from further afield.

We don’t need to mention Covid any more, but diseases, for humans, or more frequently among animals, have provided periods of great difficulty for racing. In February 2019, a full year before our first lockdown, racing was halted for nearly a week due to an outbreak of equine flu. Horses were confined to their own premises without visitors, until the risk could be assessed.

In 2001, it was foot & mouth which put paid to the sport, including high profile casualty the Cheltenham Festival. Entry to racecourses for horse and human became possible only by rigourous disinfectant measures, and Irish runners self-policed their own ban to protect their own livestock. Whilst the disease is only incurred by cloven-hooved livestock, the prospect of transmitting on clothing or footwear was such as to prevent the shipping or movement of animals around the country. 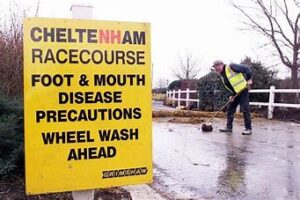 You don’t need to be a meteorologist to appreciate that the climate has become more unsettled in the past 25 years, even in the temperate climate we enjoy in Britain. In my time as a Clerk of Course, I can remember grim conditions, but races are run at a brisker pace nowadays, and there is more appreciation of the risks incurred. It is no longer feasible for the senior steward of the meeting to act unilaterally along the lines of “It was perfectly raceable in my day!” Consensus with racing professionals means a collaborative approach works far better.

The most famous cancellation is perhaps one that didn’t take place. The Cheltenham Gold Cup of 1987 was held in typical March weather: filthy! Thick snow began to fall just as the runners cantered to post, and began to ball in the horses’ hooves. The starter and Clerk liaised and brought the horses back to the paddock, whilst they took stock. Some 90 minutes later, as the skies cleared and so did the track, the race was able to run, and mudlark The Thinker was able to enjoy a victory for the north.

Our own Clerk and CEO, Simon Sherwood, has cause to be glad the Gold Cup of 1983 wasn’t a victim of the wet weather. His barnstorming victory on Desert Orchid was run in very wet conditions that might have brought on an early cessation at any other racemeeting.

In December last year, fog took a hand in cancelling racing at Chelmsford and Punchestown. The Rules stipulate that the Judge must be able to see either the furlong marker or last fence. Not so in a classic British and Irish pea-souper.

Contrast this with the cancellation of two Canadian fixtures in July this year, which were forced to abort due to severe wildfire smoke billowing across the racecourse. The wonderfully titled Battle of the Foothills races and an orthodox Thoroughbred fixture at Century Downs were cancelled as the air quality was deemed so poor. This is a common enough problem we don’t incur here at home. The same occurred in New South Wales in December 2019 – their mid-summer – where bushfires reduced air quality significantly.

Living on a small island, excessive heat in summertime isn’t usually our problem. Not so in the larger continents. In July 2020, Monmouth Park , Oceanport, in New Jersey, called a halt after two races at 1.30pm, and finally finished the card after 8pm despite not enjoying floodlights. Scrutiny of horsemen during extremes of temperature is intensifying from the anti-cruelty lobby so this was a smart move.

The two most infamous examples of aborted races have to be the Grand Nationals of 1993 and 1997. In the first instance, Jenny Pitman’s Esha Ness, ridden by John White, won the National that never was, a race that produced a false start, ignored or not seen by around half the field. Esha Ness’ achievement has no record in any form book despite coming home first in one of the oddest races ever run. Under the Rules of Racing, the stewards had no choice but to void the race.

There were equally dramatic scenes in 1997 when a bomb scare forced the total evacuation of the racecourse shortly before the National. Everyone, from public to staff, was forced out on to the nearby streets and the horses were left to fend for themselves in the stable yard until the drama had passed many hours later. Liverpool’s reputation for hospitality was tested and not found wanting, many finding new friends for life in the camaraderie that followed. The race was finally run at 5pm on the following Monday, won by Lord Ghyllene, owned by then owner of Uttoxeter Racecourse, Stan Clarke.

In 1975, a rancorous strike by stable staff over pay and conditions threatened to shut down racing. The Newmarket Guineas meeting was a major target with an early example of secondary picketing. When this didn’t work, the strikers staged a sit-down on the racecourse, obstructing the runners going to post and preventing the races from starting. Ironically, the sentiments both of the crowd and jockeys were with the strikers, until that moment.  The disruption continued and officials arrived on the Saturday morning – 2,000 Guineas day – to find 15 potholes in the middle of the course. Strikers had stolen a bulldozer during the night, driven it through a fence and torn up the turf at the mile gate. Willie Carson takes up the story, “Because of the damage they had to start the 2,000 Guineas with a flag rather than from the stalls,’ Carson recalls. ‘Frankie Dettori’s dad was riding Bolkonski and he got a flyer and went on to win.’

The strike was resolved with a pay deal 2 months later but proved rather hollow. Of the 200 or so strikers, 71 were sacked on their return to work.

Demonstrations are nothing new in racing. The sport treads a fine line in ensuring competitive sport and managing rising expectations of animal care and husbandry which this last week’s National Racehorse Week has done plenty to assuage.

The 1993 Grand National debacle illustrated just how difficult it is to stop a race once it has started. Yet at racecourses the world over, human obstacles are the most frequent “hurdle” runners have to contend with. Sadly, the demon drink is normally to blame. Incidents at Leicester earlier this summer and in New Zealand, from a golfer collecting his stray ball whilst completely oblivious to a field of sprinters thundering toward him, have all threatened to end in disaster. Were it not for our jockeys, able to act on razor-sharp instincts, more Emily Pankhurst moments would arise, and curtail racing.

I’ll end with the quirkiest reason for a race cancellation I found this year. Spare a thought for the groundstaff at Saarbrucken Racecourse in southern Germany who arrived on raceday to discover a herd of wild boar had undertaken their own version of “Carl Davis is innocent” taking the racecourse by storm and leaving holes everywhere. The meeting was abandoned. Meanwhile a team of hunters is now on hand to cull them should they return and fences have been erected.

As excuses to the senior steward go, that one takes some beating.