The women leading our sport into the 21st century

When Rachael Blackmore won the coveted top jockey trophy at this year’s Festival, and topped it 3 weeks later by winning the Grand National, there was talk of laying the ghost of spurned lady riders once and for all. Despite being considered as a male-dominated industry, representation in horse training is actually quite impressive, especially when compared to other sports like football or darts that aren’t nearly as diverse. Racing is one of very few sports where men and women compete alongside each other.

In almost every stable yard, women riders outnumber men, perhaps through a greater affinity with the horse, or a lower imperative to earn more. Either way, the pool of riders aspiring to reach the professional ranks is more gender-balanced than at any time on the sport’s recent history. But despite a 14 study by Liverpool University showing that women riders at at least the equal of their male counterparts, there remains a rump minority of owners and trainers who eschew women riders from the still small pool available. Only 11% of professional riders are women.

In fact, some of the best, most successful trainers in the business are female. The word is getting out via increased media coverage and betting, which is big business. With the advent of the internet, even more people have access to online betting sites that offers the best odds, markets, and bonuses. There are even review sites that help bettors find the best opportunities for horse race betting online, including sites like Bonusfinder. As such, more and more people are getting the racing bug and for newcomers, the idea that one gender is inferior to another in skill and expertise is anathema, and quite right too.

Since Norah Wilmott became the first woman racehorse trainer to train a winner in 1966, the success of the distaff side has been a steady progression, both among trainers and riders. Today’s women conditionals like Millie Wonnacott, Lilly Pinchin and fully fledged professionals like Rachael Blackmore have found the pathway that much easier for the pioneers who came before them.

Here are just a few who have graced the top flight of the National Hunt game over the past 50 years.

A trinity of Dickinsons dominated the National Hunt game in the 1980s, when first Tony, then Michael, and subsequently Monica, were a force to be feared in all the top races, at a time when the powerhouse of British Jumps racing was in the north of England, not the South-West. The matriarch behind a generation of nearly 950 winners trained from Harewood in North Yorkshire, first by her husband Tony, who became Champion Trainer, then Michael, who set a milestone when training 12 individual winners on Boxing Day 1982, including Wayward Lad in the King George, and subsequently in her own name from 1983-89, Monica was a tour de force that also launched many of our best known riders. She died in 2008.

Jenny Pitman broke the first glass ceiling when becoming the first woman to train a Grad National winner in 1983 when Corbiere won the world’s most famous steeplechase. She took out a training licence in 1975, and her Lambourn stable became one of the best known of her generation, with horses like Burrough Hill Lad (Cheltenham Gold Cup 1984, Garrison Savannah (Gold Cup 1991) and Royal Athlete (Grand National 1995. On her retirement in 1998, she turned to writing, publishing a number of entertaining novels on a racing theme.

Gee was born into a racing family, being the daughter of trainer Roddy, and brother of Marcus, one time winner of the Grand National on Mr Frisk, and now columnist for the Telegraph. As an amateur rider, her style had something in common with Jonjo O’Neill in a never-say-die attitude that won her the loyalty of owner-trainer Geoff Hubbard, for whom she rode a number of high profile winners, not least a memorable Festival double in 1987 when riding Hubbard’s Gee-A in the Mildmay of Flete (now the Plate) and The Ellier in the Kim Muir. With 100 winners to her name before injury forced her to draw stumps, she broke some glass ceilings for others to follow.

You don’t need to be an ardent fan of horse racing, horse race betting, or sports bettors to have heard the name Venetia Williams. She has been a prominent name in the horse training circuit and earned her stripes while in Australia before moving on to the United States and France, earning global appeal. She was also known as one of the most fearless amateur jockeys and one of the first women to take part in the Grand National.

Born in Cornwall in 1960, Venetia specialises in horses that favour soft ground and typically prefers National Hunt events over flat racing. Her stables are near Ross-on-Wye, and she gained her trainer’s license in 1995. Unfortunately, a fall in 1988 meant Venetia has to give up her career as a jockey, but that didn’t stop her from excelling as a horse trainer. In 2009, she became the second female trainer to have her horse win the Grand National. This was followed by numerous other victories in events like the Hennessy Gold Cup and the King George VI Chase.

Unsurprisingly, Ludlow ranks highly in Venetia’s tally of winners. 76 winners to date at a win-runner ratio of 16%. Her Ludlow runners have a 1 in 2 chance of reaching the frame.

London-born and Ireland-raised Jessica Harrington (nee Fowler) moved back to England. Husband Johnny Harrington was a bloodstock agent who owned a racehorse and the couple developed a shared love for horse racing. Jessica’s love for horse racing soon meant her attention was turned to riding, soon earning her a reputation as one of the most talented three-day event riders. 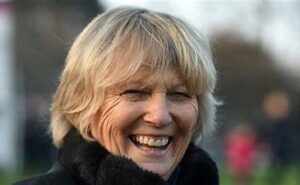 It seemed nevertheless that racing was her real passion, earning her a permit to train in 1989. Jessica became known as a National Hunt trainer, but she is more than competent on the flat, with Group I success in races of the calibre of the Cheveley Park, Marcel Boussac, and Moyglare Stud Stakes. Her Jumps runners are always to be respected, especially when she travels over the Irish Sea. Horses like Space Trucker (Fighting Fifth, Grand Annual Chase), Moscow Flyer (Arkle, Tingle Creek, Melling Chase, Queen Mother Champion Chase), Jezki (Champion Hurdle), Sizing John (Punchestown Gold Cup, Cheltenham Gold Cup) and Supersundae BHP Irish Champion Hurdle, Punchestown Champion Hurdle, Betway Aintree Hurdle)  ensure that any runner she brings across to the big fixtures in Britain will have a posse of support both from Irish and British admirers.

When it comes to women riders, Nina carried on where Gee Armytage had left off, winning her first Festival race in 2005 on the newly inaugurated Fred Winter Juvenile Hurdle. Sadly, no other woman had broken through in the intervening 18 years, but a career spanning 350 winners across the UK and Ireland made her a household name in racing circles, with four Festival winners and an Irish Grand National to her name. Once again hailing from a racing family, Nina made excellent use of her background to sustain an amateur career for 18 seasons.

Most recently, the most successful rider of her gender has been Lizzie Kelly, powered by the stables of her parents, Nick and Jane Williams, training first together, then separately. Whilst her career is among the shortest of those I’ve highlighted, it included the first Grade I success by a woman rider when Tea For Two won the Kauto Star Novices Chase at Kempton’s Christmas Meeting in 2015, and a brace of Festival handicap victories.

10 months into her new role as CEO of the British Horseracing Board, Julie is a career professional in sports governance and promotion, and it’s only fitting that she should be included in any list of pioneering women in the sport, as the first woman leader of the sport. After a spell of 8 years with Northern Racing (now ARC), Julie spent 4 years leading British Cycling before joining BHA in January this year.

It didn’t take long before one of racing’s perpetual crises tested her mettle, when the Gordon Elliott saga hit the headlines. BHA dealt with the issue promptly, fairly and efficiently, winning both the organisation and its leader plenty of praise. She may be no athlete like the others mentioned, but she is a critical cog in the successful machine that is British racing.

The exploits of current leading rider Rachael Blackmore have already generated thousands of column inches of copy, especially since her successes in the UK. Perhaps more than any other before her, she has made it possible for spectators and racing fans to put gender in the background and consider her just a jockey, like any of her counterparts on the other side of the Weighing Room.

And racing should take great pride in the fact that whether in racecourse administration, in the stable yard or competing at every level, racing is more forward-thinking in its approach to gender equality than almost any other mainstream competitive sport.