Happy News keeps the prizes at home for Groucott

Spectators at Ludlow had to wait until the last race of the day for the closest finish on a day when runners remained thin on the ground despite last night’s rain. But the finish of the Butcher Woods Ltd Novices Handicap Hurdle was well worth the wait as Jamie Moore conjured a final extra effort from 2/1 Imphal to land the odds for favourite backers. Trainer Gary Moore will be hoping that the long-awaited debut win for the impeccably bred seven year old son of Nathaniel will be enough to generate a sale to a new owner other than himself.

Second -placed Dynali and third Tip Top Cat lost little in defeat , although the winner was going away at the close, suggesting the extra distance of this race was welcome. 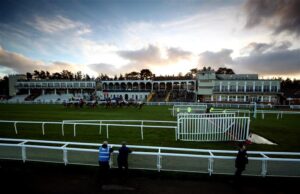 Fergal O’Brien, train of Tip Top Cat, had earlier maintained his relentless winning run in the day’s feature Lord Ffrench Novices Limited Handicap Chase. In this rather less competitive race, the four runners were already spreadeagled by the winner Golden Taipan by the time they reached the third last, and he put more distance between himself and his rivals by the winning line, despite a sketchy leap of the final obstacle. This was a first chase win for the seven year old and first past the post since winning a Juniors Bumper during lockdown blues in February of this year. The partnership with O’Brien has also put rider Paddy Brennan into a hard-earned second place in the Jockeys’ Championship with 44 winners to Brian Hughes 73. The likeable Hughes looks unassailable – injury permitting – given his work rate: 345 rides already this early in the season seems scarcely credible.

In the other chase of the day, prizes were kept firmly within the county boundary, when Shropshire trainer John Groucott produced Happy News under Gina Andrews to win the Ludlow Racecourse supporting Racing Welfare Week Amateur Riders Chase by 1 1/2l from long time leader Gouet de Bruyeres. Groucott had two reasons to be happy afterwards, as fourth placed Muse of Fire is also under his tutelage, albeit some 28l further back. It looks like Happy Hour is growing a fondness for her local course; this was her second win here after a novices handicap back in December.

The feature Vera Davies Handicap Hurdle went back to the Forest of Dean, where John O’Shea trains a select band of horses under both codes. Just The Man followed up his three wins on the Flat to produce a winning effort over his six rivals, going away at the close to win by 2 1/4/ under Adam Wedge. O’Shea’s namesake trains successfully in Sydney, where interest is rising ahead of the famous Melbourne Racing Carnival which starts next week. 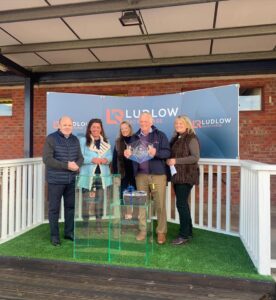 You can generally rely on Nigel Twiston-Davies to have his runners well prepared for the autumn fixtures, before some of the high-priced purchases from his wealthier Berkshire and Somerset-based rivals get into gear. Despite great success, there are few of the uber-wealthy owners buying exotically priced blue-bloods for the Naunton operation, but their results more than justify btheir position toward the top of the trainers’ table, and a 16th winner was forthcoming in the opening Ludlow Brewery Novices Hurdle when Key to the Moon made his first Jumps race a winning one, after making all. And whilst he was running down his hurdles at the business end of the race, he ran on well to win  by 2 1/2l in the end.

The name of Hollinshead is well respected across racing, and the latest to carry  a training licence is Sarah, operating from the old base in Upper Longsdon, Staffordshire. She’ll return home satisfied after red-hot favourite Sinndarella landed the odds in the 3 runner KLF Insurance Mares Novices Hurdle. The small field made for a muddling pace that is reflected in a time that was 17 seconds slower than standard for the distance, but connections won’t mind that. Racing has never been a race against the clock.