Please Note: Jump season starts again in October, and we are looking forward to welcoming you back then. 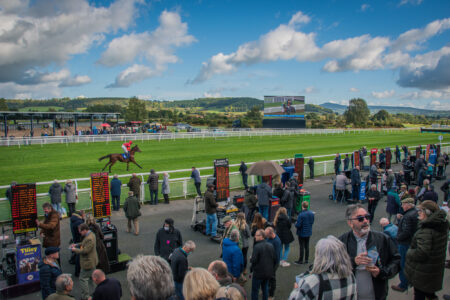 Hats off to groundstaff at Ludlow for producing a winter card with the highest number of runners in a chase among today’s three cards. The eight runners that started in the Marsh Commercial Novices Handicap Chase produced a scintillating finish too, not without incident either.

Not that one could say the pace of the race was remarkable; at 26 seconds behind the standard, this was a slow run race that evolved into a dash for the line that caught out both Alderson, who fell four out, and Bill Turner’s Born At Midnight, who didn’t see a stride at all at the second last when leading by 3 1/2l and set to win. Two crunching falls within 3 fences allowed grey Family Pot to break his maiden at the 11th attempt for Brecon handler Sheila Lewis.

Sheila is typical of the bedrock of this sport we all follow. A beautician by trade, she runs a beauty parlour alongside training racehorses; as faces like Lester Piggott’s will testify, early mornings and sharp winds do little to improve a complexion, so she should have plenty of custom from within racing’s ranks. Something tells me however that the appearances of their horses are of more interest to most owners, trainers and lads!

Paddy Brennan illustrated in fine style why he is in such demand as one of the senior members of the Weighing Room when completing a chase double in the G C Rickards Ltd. Handicap Chase over the minimum distance. Making all against her 3 rivals, Bathiva was anything but foot-perfect, but held her advantage under strong driving to win by 3l.

An hour earlier, Brennan had been equally forceful on Brief Ambition, now twice a winner over fences in two starts, but arguably, not the keenest horse to look through a bridle. Still, the money was down on the 1/3 favourite, and the rider wasn’t going to let his mount off the hook this time around. But lest the reader consider us to disparaging about the winner, this was the fifth success from just 12 starts for this ex-Irish Pointer, so congratulations are in order, even if there are higher profile stars in the Fergal O’Brien stable. Shortage of winning horses there certainly isn’t; these two were part of a cross-card treble that brought the stable’s seasonal tally to 81 from 54 individual winners.

The day began – and ended – in glorious late November sunshine and first to score was the Twiston-Davies team of father-son combination Nigel and Sam Twiston-Davies. Maiden hurdler Stream of Stars made it Indian file for the remainder with a virtual pillar to post performance where he was never overly stretched in the Racing TV Club Maiden Hurdle. Winner of an Ascot Maiden, this impeccably bred son of Sea The Stars might reasonably have been expected to be competing in more exalted circumstances by breeder Lady Bamford, but racing is the great leveller. And whilst the Bamford connection is no longer with the horse, doubtless a benign satisfaction would arise from the Daylesford box at Cheltenham were the winner to improve enough to appear next March.

Twiston-Davies Jnr was successful again later in the afternoon for Richard Newland, when Art of Diplomacy ran out a 4 1/2l winner of the Thank You Andrew Ballham Handicap Hurdle over 3m. Three in a line jumping the second last rewarded the handicapper for his assessment, and the rider conjured a sound leap from his mount at the last to assert. Small womnder therefore that Twiston-Davies is a mainstay of this Worcestershire stable, with over 50% of the rides available.

If truth be told, many hardened racegoers are headed for the exit gates rather than see a conditional riders’ handicap hurdle, but the plenty that stayed were rewarded with the completion of a four-timer for Orchard Grove in the Don’t Miss A Beat with Racing TV Handicap Hurdle. Five were well in contention at the last, but Orchard Grove, previously a winner at Stratford in late August and Uttoxeter twice last month, showed some pace to put 3/4l between him and favourite Sergeant from the Warminster yard of Milton Harris. Chalk that one up to Monmouthshire trainer Kerry Lee, enjoying an eighth winner of the season, and her conditional Daire McConville, enjoying better success over here than in his native Ireland.