Ryan who? Hats off to double-toting Potter

Name me a trainer with a 75% strike rate in the past 2 weeks? To pre-empt you, it won’t be an obvious choice. Enter stage left one Ryan Potter.

Ryan trains near Ross-on-Wye, and enjoyed a rare double at Market Rasen today, proving that the small handlers can mix it with the big boys, and occasionally come out best.  Ever since Harold was an unlucky loser at the Battle of Hastings in 1066, the British have always enjoyed the success of the underdog, even if no-one likes being described as such!

Potter’s is not a rags to riches story. A single winning ride from nearly 50 rides in an open maiden at Siddington marked out little future as a rider. But training has been a different story. Flitting between Point-to-Points and Rules racing since a debut performance in 2011, he’s kept up a near 20% strike rate from a small volume of runners, winning most recently between the flags in a Kingston Blount Open race this May. 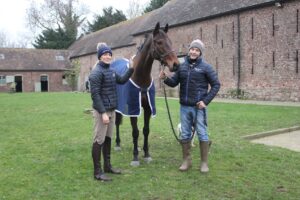 Five individual winners from 19 different horses running for the yard tells a promising story of improving moderate horses. And for yards of this nature, one winner is special. London Bus syndrome – you wait for hours for a bus, then two come along at once – is a rarity.

Nine year old Light Flicker looks like the sort of horse every self-respecting small trainer would like. Twice a winner last season, his 2l victory today  under top weight gives the impression he might repeat the same level of success before next April is out.

The second winner, High Grounds, hasn’t shown a great deal since winning a Lingfield Maiden over 1m2f in 2016. More recently, he’s changed hands as regularly as the clocks change, so perhaps a feeling of permanence ans security is as important for horses as for humans. At any rate, today was his day, ably assisted by Callum Bewley in a 2m 7f handicap hurdle.

If neither race makes national headlines, don’t be surprised. In racing’s small parish, the only headlines presently are sadly about a spat in the Weighing Room, but this does nothing to diminish the success of those small handlers somehow earning a living from our wonderful sport. And for all the headlines, the vast majority of our sport’s followers are more interested in the horses.

Meantime, Henry Daly continued to familiarize himself with the feel of the Winner’s Enclosure that was markedly absent for much of last year, when Lime Drop justified 7/2 favouritism in a Mares Handicap Hurdle at Leicester.