Tom George enhanced his excellent record at Ludlow today with a chase double at a cumulative 24/1, as softer ground delivered better fields all round. Two from four runners is a good day at the office.

In the G C Rickards Ltd Novices Handicap Chase Jobesgreen Lad was always handy, led four out and maintained his advantage to the line, even to the extent his rider Jonathan Burke could assess the opposition on the inner track big screen to his right on the run-in. The 3 1/4l winning distance might have been more if needed. 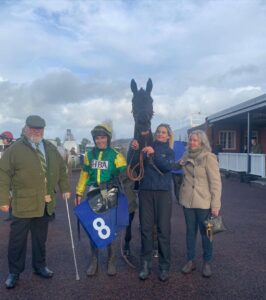 Raya Time looks like a horse to follow in the Roger Brookhouse colours after a facile 20l victoru in the Alpha Aggregates Ltd Novices Handicap Chase over half a mile shorter. The good-looking grey always had the upper hand over his rivals once he took it up, and outjumped the only two remaining over the last two fences to win in good style under Tom Scudamore (above). That brings to 19 the winners from the Slad yard which has enjoyed more winners at Ludlow than any other British track bar Uttoxeter.

The feature event of the afternoon was an equally bloodless affair, with Minella Encore scoring a second chase win since undergoing wind surgery in September. In between this and a win at Fakenham, he was pulled up in a more competitive amateur riders’ handicap on Paddy Power Gold Cup day, but there was no mistaking the ease with which he disposed of this field, winning lengths in the air over the last 3 fences and running the opposition ragged. Richard Newland and Sam Twiston-Davies make a formidable team in handicaps.

The day began with the closest finish of the day, in which Overhaugh Street and Liberty Power fought it out over the last two hurdles. Despite both horses wandering under pressure, David Bass was able to grind out a little extra from the Ed de Giles – trained Overhaugh Street to win by a neck for his second winner of the season. The primary focus of this Ledbury yard is the Flat, but an impressive 18% win to runner ratio over hurdles is not to be ignored, and he looks open to further improvement for sure.

The Alpha Aggretgates Ltd Mares Handicap Hurdle produced a West Country winner for champion trainer Paul Nicholls, but it didn’t look that way for much of the final stages of the race, where  Voice of Calm, Puffin Bay and Progressive looked to dominate. Angus Cheleda had already had to work hard to get Miranda into the race with a reluctant start that lost her lengths, but his persistence paid off, and with the help of the outer rail, he prevailed on the line to win over Voice of Calm by a nose. One wonders whether this mare will win again; whilst she ran on, she looks to have something of a mind of her own, which is not necessarily to be encouraged in racehorses!

The judge had to concentrate a third time in the afternoon in the Peter Robert Garbett Memorial Conditional Riders’ Handicap Hurdle, where the race distilled into a straight fight between Steinkraus, from Donald McCain’s and Nelson’s Rock, from the Tizzard camp. Over the last, the former under Peter Kavanagh just had the edge, but Harry Kimber’s neat style and rythmn got Nelson’s Rock back alongside, and in the event, it was on the nod. A short head separated the two at the line – simply the best advertisement for racing and quality riding from two of our budding riders of the future.

Fairyhouse Point-to-Point winner Fancy Stuff kept up an unbeaten record for the Skelton team when winning the concluding bumper, after an excellent weekend for the Alcester championship contender, who is altogether happier seeing winners led in than reading about discontented owners in the Sunday papers.