Too much racing? Think again

It’s a common refrain in racing that there’s too much of it; that if there were less fixtures, somehow the quality of the fare would be improved. Sadly this is a specious argument. Leaving aside racing’s valuable income streams from media and betting, which rely on constant racing day in day out to perpetuate a steady revenue, the sector has successfully grown a nursery of professionals breaking, pre-training and bringing on young horses, each of whom becomes an ambassador to sell ownership, and racing at large. Who is to say that less racing would be good for these folk?

Growing up around a racing hierarchy generally populated by middle-aged trainers, I think the average age of our professional trainers is lower than for some time. This is patently a young man’s game, which makes the achievements of the sport’s elders, whether of this generation – like Nicky Henderson, or previous generations – like Fulke Walwyn, truly remarkable. To stay at the top of your profession for a generation takes some doing.

The mainstream of racing trainers dominating the sport may be men and women in their fifties, or sometimes older, but behind them, each year, is a constant stream of new, mainly young, entrants to the sport. And the amateur ranks of Point-to-Point racing are playing a more and more important role in producing our latest generation of young trainers.

Let’s take a Shropshire example, topical by dint of having trained a winner at today’s Catterick fixture. Sam Allwood trains a small string near Whitchurch. Out on the Tear was a well-backed 2 3/4l winner of a modest handicap chase around Catterick with others from better-known yards behind him. He is just the second winner of the season for the small Allwood operation – a cause for celebration back in Whitchurch.

With his wife, Vicki, Sam has already amassed a wealth of experience around National Hunt racehorses, initially from riding and training Point-to-Pointers and from spells with leading trainers. Some 75 winners, of which around 10 under Rules, showed he was no mug in the plate, but after hanging up his boots in 2013, he set about establishing a training yard.

Vicki learnt to ride as a child, and since starting with Annabel Murphy in Warwickshire at the tender age of 16 has pursued a dream of working with horses. She’s spent time in racing yards in Ireland, and as travelling head girl to Jonjo O’Neill and Dan Skelton.  In 2015, she moved to be with Sam and set up a horse transport business, taking bloodstock to the races, to sales and from stud to stud.

There are a great many businesses like Sam’s and Vicki’s that tread a line between Point-to-Pointing and Rules racing, which improves the quality of the amateur division, and feeds runners into Rules racing.

The Rules training business is, as yet, a fledgling operation, with just 15 boxes to fill, and as yet, less than 100 runners per season. However, it is a viable business, it is growing, and it supports at least 2 full time staff. Racing, as a primarily rural-based sport, is a key employer, contributing to the local economy. What’s more, Shropshire is not over-populated by racing yards, and the stimulus that a yard provides in a village or a region, especially if it is successful, is a major driver to spectator growth and participation in the sport. If you’re in any doubt on this score, appreciate the synergistic relationship between the extraordinary volume of racing yards in the Cotswolds, and the success of Cheltenham Racecourse. Imagine the same scenario around Ludlow! 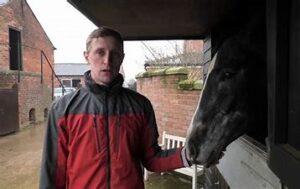 Sam Allwood, now in his eighth season with a full licence

The Skeltons, O’Neills, Hobbs and Nicholls of this world don’t yet tremble when an Allwood runner is declared against them. But the small handler is very much alive and kicking, and Sam Allwood is representative of the next generation of handlers learning their trade and elbowing their way to a sustainable future in the sport. As a sport, we should be encouraging such endeavours, and other racing business models like those in France do far more to sustain and encourage people to start training businesses. The obstacles to entry to the sport remain a major disincentive in the UK market.

So when the hoary old argument about too much racing comes around again, ask the question. “For whom is there too much?” You certainly won’t find the likes of the Allwoods wanting less.