Tanners raise a glass of Christmas cheer to our winners

Christmas is generally a pretty bucolic affair, so perhaps it’s no surprise that Tanner’s Wines has been the lead sponsor of Ludlow’s pre-Christmas fixture for over 25 years. As most of their work for the holiday period must be done, a celebration should certainly be in order. It’s with partnerships like these that racecourses can break out of the vice-like grip of sponsorship from betting brands and broaden their appeal. So three cheers for Tanners for staying the course; we look forward to the fiftieth anniversary of your participation at Ludlow.

And whilst most eyes may be on the busy Christmas period, including the King George VI Chase, Welsh National and New Year’s Day at Cheltenham, there was cause for trainers in the western counties and the Marches to be well pleased with today’s events at Bromfield.

In these days of gender equality, an amateur riders’ race for ladies is something of a rarity, dare one say, even a throwback. Nevertheless, that a field of 11 faced the starter is a sure sign that the race is mighty popular, and it was a ladies’ trio that landed the spoils as Venetia Williams  continued her sparkling run of form, in partnership with Lucy Turner, for owner Lady Price, heading up a syndicate of friends. No surprises here: Green Book went off at prohibitive odds of 1/3, but the young Turner, scoring her second winner of the season, both this month, looked ion control of the race throughout. The Kings Caple team are running hot presently, with 11 winners this month already, and big race winners at Cheltenham and Ascot these past weekends on top of Cloudy Glen’s victory in the Ladbroke Trophy at Newbury.

Jonathan Burke took the ride on progressive novice Scene Not Herd for Charlie Longsdon, when Brian Hughes was kept for the mount of favourite Minella Trump for the McCain stable in the second race, the G C Rickards Novices Limited Handicap Chase. Burke is heading toward his best ever season with 35 winners under his belt and that confidence is showing in his riding. Whilst this was a small field, the six year old stuck to his task with gusto, to score his third consecutive chase win, and his jumping looks smooth and assured. Burke has some choice rides to look forward to over Christmas, including Not So Sleepy in the Christmas Hurdle and The Big Dog in the Welsh National, both well fancied. 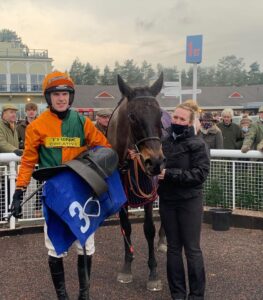 Head To The Stars and Ned Nugent after their chase winner

The fizz had to be kept on ice a few moments half an hour later when Burke was involved in the closest finish of the day for the Tanners Cava EBF Mares Novices Hurdle qualifier. Holly Hartingo, under strong driving from Burke, wore down leader Nextdoortoalice to set up leg one of a  double for Alistair Ralph, another trainer enjoying a good season. There was a neck in it at the line, but it was a close-run thing. Too many finishes like that, and the judge will be reaching for a whisky, not a glass of bubbly.

Ralph’s second winner was an altogether calmer affair in the concluding Mares Bumper, in which Tintern Abbey might never have seen another horse, leading from pillar to post and winning largely unchallenged for the last race in the UK before Christmas. Alan King’s Pass The Love On came out of the pack to erode her advantage late on, but was always held.

Ludlow’s effort in staging valuable handicaps has been amply rewarded over the years with competitive fields, well supported by racing’s great and good. Six went to post for the feature 2m Tanners Champagne Chase, and between the last two fences, it looked as if the Fergal O’Brien trained Gumball would assert, under Paddy Brennan. In the event, however, he hung enough to allow the straight-running Not Available to finish the better for Matt Sheppard and son, Stan. That’s two on the trot for Not Available, last seen winning on ITV at Newbury at the turn of the month, and a great advertisement for the modest-sized yard in the grounds of Eastnor Castle that is the Sheppard empire. 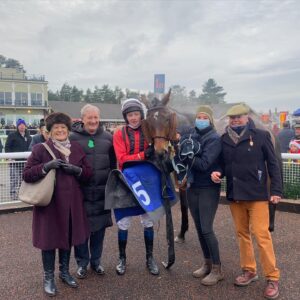 Horses for courses is an old adage of punters, and there seems little doubt that Head To The Stars is a fan of Ludlow, or perhaps he’s better with short transport links, given he is locally trained by Henry Daly. Either way, he overcame three others in line for a tight finish at the second last in the Tanners Claret Handicap Chase over 3 miles, to win by 3l in the end. Yet at the second last, you could have named Venetia Williams’ Didero Vallis a winner, even the length down Smarty Wild. Head To The Stars has been called mercurial, but that looks an unfair description of his game and resolute gallop to the line. He certainly deserves a glass of something at the close.

Nicky Henderson has always been one for the big occasions in racing, and Champ’s victory in the Howden Long Walk Hurdle on Saturday will have given the Seven Barrows team great heart in advance of a key week in the calendar which can alter your position in the Trainers’ Championship in dramatic fashion. Yet the everyday performances of the next crop of novices is as good an indication of wellbeing as any btelevised winner, and Irish Point-to-Point graduate Balko Coastal has done little wrong in two races over hurdles. His 1 1/4l win in the Tanners Prosecco National Hunt Novices Hurdle continued the steady build-up of his reputation and he merits a higher profile race next time around. Both he and runner up Frere d’Armes pulled well clear and both are worth noting.