Hands and heels wins the races

A bright January afternoon at Ludlow offered two perfect examples of when use of the stick can sometimes unbalance a horse this afternoon. In the two closest finishes, separating first and second by a neck and and head, the winning rider had in both instances focused on drive and balance against use of the whip.

It was a day of contrasts. 10 lined up in the opening Conditional Riders’ Handicap Chase amongst which were some of the leading riders of the sport’s future. An unremarkable race on paper provided a perfect spectacle with four in a line at the final open ditch three from home. By the last, the lead was between Ivilnoble and Steel Wave, whose blinkers suggest a thinking horse. However, under firm driving from Tabitha Worsley, he ran a truer line to win his seventh race for Gary Hanmer with great resolution, a second win of the season since prevailing in a similar race at Stratford in late October.

Another graduate of the Point-to-Point ranks delivered the winner of the Heath Farm Meats Maiden Hurdle an hour later, for what seemed like old times. Owned by Diana Williams, whose horses have included Hazel Hill, trained by Mel Rowley and ridden by claimer Alex Edwards, Latitude saw off 11 other starters to win the 2m 5f contest with something in hand. His jumping will need some polish, but it was a winning start over obstacles for the Maisemore and Aintree bumper winner. 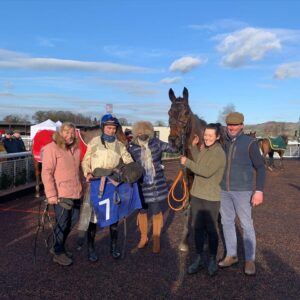 The Point-to-Point theme continued with the first of Ludlow’s hunter chases, won by Jamie Snowden’s Hogan’s Height, one time winner of the Grand Sefton Chase at Aintree three years ago. Under the guidance of leading lady amateur Gina Andrews, who a fortnight ago passed Polly Gundry’s record of 300 Point-to-Point winners, Hogan’s Height relished the conditions and standard of opposition to win by 4 1/2l. Expect to see him pot-hunting I would imagine.

The finish of the day came in the Feature G C Rickards Ltd Mares Handicap Hurdle, where Tom Scudamore showed why he has remained near the top of his profession for nearly 20 years with a driving finish on Colin Tizzard’s So Said I, beating Lucy Wadham’s Terresita a head. Both horses were under strong driving into and after the last but So Said I found more once Scudamore had put his stick down. It was as exciting a finish at Ludlow as I can remember.

The feature Billy Preston Steeplechase was won by the Fergal O’Brien trained Karl Philippe, whose owners include a certain H Redknapp. Paddy Brennan had to sit tight at the fourth last as the partnership sprawled on landing, but the 7 year old retained his balance to kick on again and assert a 3 1/2l advantage at the line. O’Brien winners have been harder to find over the past month or so, but with 98 on the board, he looks most likely to become the second trainer in the UK to top a century of winners after Donald McCain passed that milestone last week. Whenever it happens, it is a remarkable achievement for a yard without the financial muscle of many of his contemporaries.

Andrew Wates has owned a great many good horses over many years, including a memorable afternoon in April at Aintree with Rough Quest a while back. Today was the turn of Zacony Rebel, who wasn’t troubled to win the 2m Novices Hurdle under Tom Cannon for Toby Lawes. At odds of 1/3, no-one got rich, but a horse can only win, and Zacony Rebel’s second victory over hurdles was convincing.

The unpronounceable Tchoupinminzac, who must be every commentator’s nightmare, showed great resolution to see off Robiola and See The Clouds in the closing bumper for Dr Richard Newland and Charlie Hammond.