A look at the underrated Australian autumn racing season

For most racing fans in the UK, the spring months mean but one thing: the climax of the national hunt season with the Cheltenham and Aintree Festivals. There’s plenty of action elsewhere, of course, including lots of meetings at Ludlow right up until May, but the two big festivals tend to gobble up the media attention and get prioritised by most punters.

But in Australia and New Zealand, things also get busy around this time of year. Very busy, in fact. Indeed, it’s arguably the case that their autumn racing calendar, with the elite events broadly coming in under the umbrella of the Melbourne Autumn Carnival, is badly overlooked. And as we know to our cost, Australia does sport very well, nor is that excellence limited to cricket.  There’s an assumption over here that the centrepiece of the Aussie racing calendar comes in spring (our autumn) with the Melbourne Cup, Cox Plate and Caulfield Cup. But there are around 70 Group 1 races held Down Under each year, and a huge tranche of them are run from February to April. 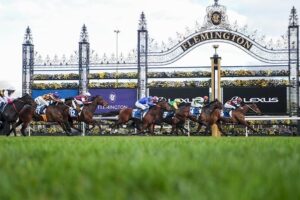 Jockeys’ Premiership heats up in autumn

For instance, this February sees the Black Caviar Stakes, Blue Diamond Stakes and Chipping Norton Stakes (lib=ving in the Cotswolds, I particularly like this one). March takes the action up a notch with the Australian Guineas, All-Star Mile, Australian Cup, Auckland Cup, Golden Slipper and several other cracking races, including a couple of top-drawer harness races like the Miracle Mile. April is all about moving the action to New South Wales, with Randwick Racecourse hosting the Australian Derby, Oaks, Sydney Cup, and the Queen Elizabeth Stakes. There’s also Australia’s top Jumps race, the Grand Annual, at Warrnambool, Victoria in May for diehard Jumps fans.

There’s also plenty of buzz around the “jockeys premiership”, something akin to the Flat and Jumps Jockey Championship here in the UK, although it gets a bit more attention Down Under, with extensive coverage on Aussie racing sites like Progroupracing. The premierships are split by region, but it is the Melbourne premiership, currently led by Jye McNeill, that’s considered the most prestigious.

One thing we have noted about Australian racing is that the organisers have come up with novel ways to get the public interested, and one wonders if similar tactics could be followed in the UK. For example, we mentioned earlier the All-Star Mile. Run on  March 19th, the race features 15 runners, 10 of whom are voted in by the public. This X-Factor-like public vote creates incredible fan engagement and ensures interest remains keen on race day. The fact that there’s a purse of A$5 million (£2.6 million) means the best horses are put forward by owners to participate.

Of course, we should note that the time difference means that you’ll have to be up late at night (or very early in the morning, depending on how you judge these things). But if you are something of a night owl, the Sky Sports Racing channel has some very decent live coverage of Aussie racing, with programmes running from 2am-7am GMT. The broadcast is extensive, offering live racing and analysis of the best events from Australia and New Zealand. As with most racing events these days, there’s also an opportunity to stream the action from bookies’ websites or other sports platforms.

But if you are looking to broaden your racing horizons this spring, the autumn calendar Down Under offers a feast of action to sink your teeth into. The rich variety of races, as we as the talent on show, makes it worth staying up for and something a little different to watch alongside the action in the British jumps racing season.