And so to our final meeting of this season, punctuated by as dry a Spring as anyone can remember. Forty-five runners across our seven race card turned out to bid us farewell until October’s restart.

The 2021-22 season has been punctuated by several themes, but one which has given much pleasure to many racing folk is the prominent showing by the likeable Fergal O’Brien. Formerly head lad to Nigel Twiston-Davies, Fergal broke out on his own after training pointers for many years, and met with quick success from a site off the Fosse Way south of Northleach. However, a quantum leap in performance has arisen since moving to Ravensbrook Farm on the opposite side of the Withington valley to Kim Bailey at Thorndale, making this little area of the Cotswolds a powerhouse in training chasers and hurdlers.

128 winners up to the end of April delivered nearly double the prize money haul of the previous – also record-breaking – season, and teaming up with Graeme McPherson has also added to the firepower available to keep O’Brien in the top five, and over £1m in prize money each year. And whilst all the counters revert to zero on May 1, there appears no change in the pace as a new season gets under way around the summer jumps courses.

To that end, that momentum was well maintained by a double at Ludlow to send us into the summer. Handicap debutant Zucayan showed good late speed to win the Racing To School Novices Handicap Hurdle under conditional Nick Slatter over the minimum trip, whilst Accidental Rebel needed all of Paddy Brennan’s most forceful riding to hold off 4/6 favourite High Tech in the three runner Maiden Hurdle 30 minutes later.

The afternoon began with an amateur hurdle in which another in-form trainer teamed up with the queen of the amateur ranks in Gina Andrews. Milton Harris has redefined himself this past season with a performance to put him in the top flight of the medium-sized yards, including a  first Grade I at Aintree. Five year old Mr Yeats was a contributor twice last season to that performance, putting the stayiong attributes of his Ascot Gold Cup winning sire to best use, and he stayed on here again under a robust ride from Gina to win by 1 1/4l to justify favouritism. The race was well supported in memory of the late Lorna Brooke, a casualty of the sport, who died after complications from a fall at Taunton in April 2021.

Martin Keighley is another trainer in a fine seam of form presently, as illustrated by the winning performance of stable favourite Mr Mafia, who scored by 7 1/2l in the Richard Strachan Retirement Handicap Chase. The game 13 year old has won 13 of his 69 races for owner Peter Boggis, and seemingly has an endless appetite for racing. Saturday horse he may not be, but he has delivered great entertainment at the right level. 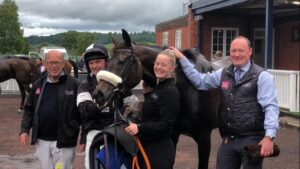 On the theme of breakthrough seasons, jockey Stan Sheppard enjoyed one such in the most recent season, wracking up 47 winners at a 20% strike rate and enough winning percentages to dream of a deposit on a house. There is no doubt that winners fuel riding confidence and the well-grounded Sheppard has already made a promising start to 2022-23. Elios d’Or, taking it up at halfway, showed a clean pair of heels to 5 rivals in the Flowfit Handicap Chase to win by 7 1/2l for trainer Robert Walford.

You’re more likely to see Alan King at a flat fixture at this time of year, and his is a yard as equally focused on big flat handicaps and Group races nowadays as on the bread and butter of the Jumps scene. Nonetheless, his runners are always to be respected, and favourite Finest View gave less cause for a hernia than two Goodwood winners earlier in the week, both winners by just a neck, when winning the Flowfit 2m Handicap Hurdle by a comfortable 2l under Tom Cannon.

It was left to racing’s latest dual licence partnership to wrap up the season, as Oliver Greenall and Josh Guerriero concluded the day as Irish Point-to-Point winner Kilbarry Leader kept up her impressive record in winning the Mares’ bumper. To date in four runs, she has yet to see the unsaddling enclosure for also-rans.

We’ll be keeping you informed with racing news from all our local racing folk over the summer so keep coming back to read our posts.